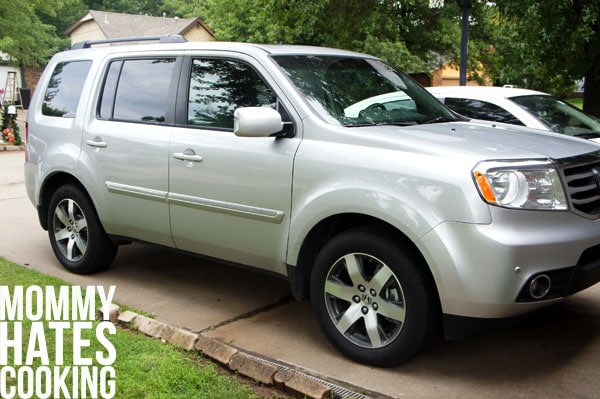 This past week on our trip, Honda graciously provided us with a 2012 Honda Pilot Touring to test out on the road for our road trip.  We were so excited for a variety of reasons, one of which is that we took a 24 hour road trip last year in our car and quickly learned how uncomfortable a tight squeeze in a car for 24 hours can be.  The Honda Pilot is extremely roomy so we knew that we would not be feeling as cramped as we were the year before.

We also have been looking at 3rd row SUVs for a while now so it was very nice to be able to test drive one for an extended period of time.  It did not take us long to realize we were falling in love with the Honda Pilot. 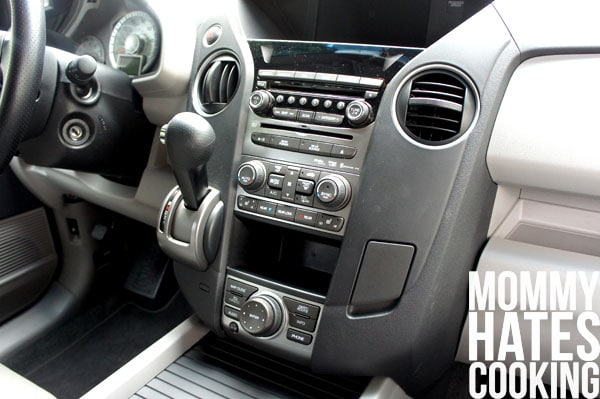 This vehicle has all the bells and whistles you could possibly imagine.  The best part for us on this trip was the navigation system.  The GPS made us map free as we were able to easily put in the route we wanted to take and go! 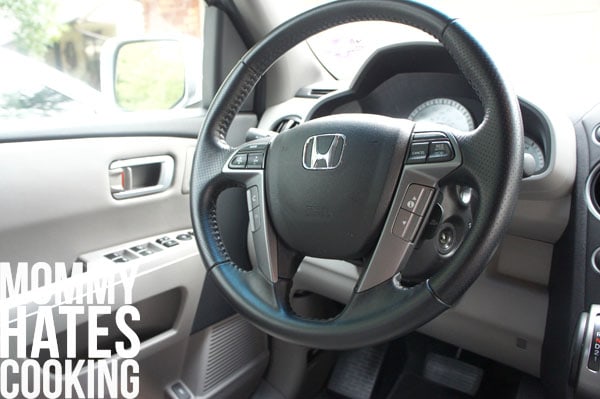 It also had plenty of controls on the steering wheel which my husband used to his advantage to play with my mind!  As we were driving we had the DVD Player on for our son.  I could not figure out how the volume kept getting turned up.  Then, I was not touching the volume controls, but I could see the volume going up.  I yelled out to my husband “See, it’s going up on it’s own!”  As he starts busting out laughing showing me that he was changing them on the steering wheel.  I’m not used to fancy!

The vehicle also comes equip with seat warmers, which my husband got me again by turning mine on.  Let’s just say about 20 minutes after turning that on my buns were getting toasty and I could not figure out why…husbands. 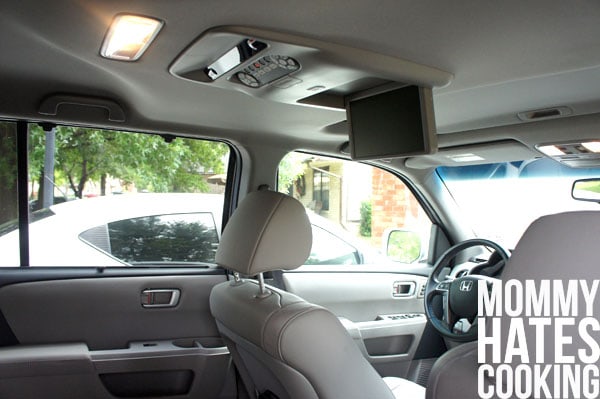 The DVD was our saving grace for this trip.  Also included with the vehicle are headphones that you can use for the DVD player or radio. 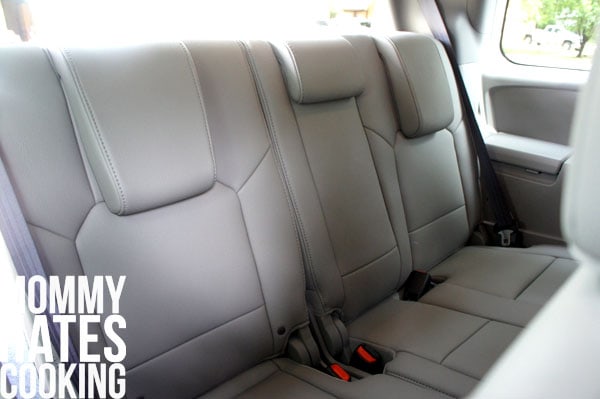 The 3rd row in the Honda Pilot is wonderful because it has an extra seat.  Most of the 3rd row vehicles we have looked at and test drove only have 2 seats. 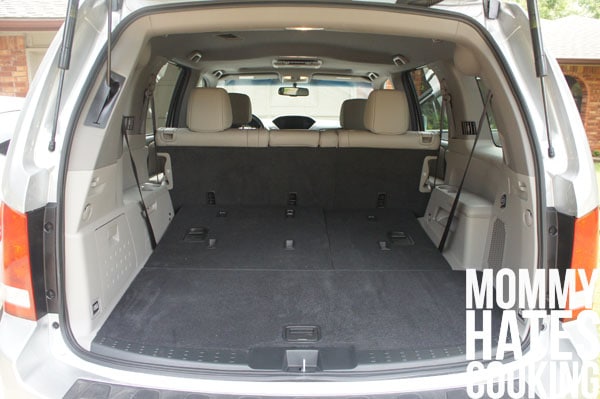 For this trip we needed all the room we could get, so we kept the seats down.  We were able to put all the seats down except for the seat our son was in. 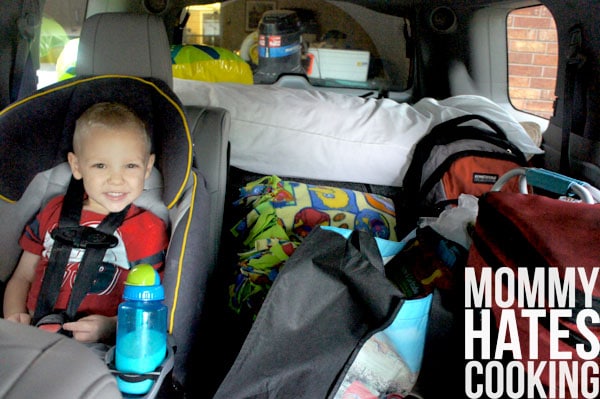 Yep, there is our son hidden among the luggage!  He loved this vehicle and that he was up high enough to see well out the windows as well.  I think he’ll be just as sad as we are when we give it back. 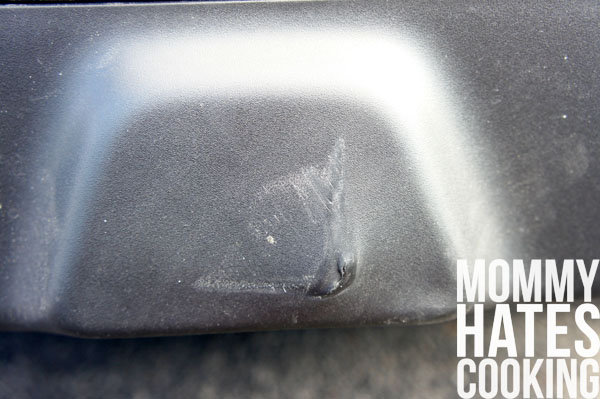 Oh and did I mention, it holds up well during a wreck!  You guessed it, we were sitting in traffic at a dead stop.  The person behind us was also stopped then he decided to go only we were not moving!  He rolled right into the back of us, enough to give us all a scare and shake him up.  Luckily, this was the only damage done!

I will add with all the wonderful pro’s about this vehicle there were of course a few things we were not real thrilled with.  Each time we opened the door the mirrors and seats automatically readjusted.  I believe this could probably be changed if we actually owned the car, but it did get annoying each time we had to readjust everything.  Another thing that would have been nice is that on the DVD player the majority of the controls are in the back.  This is perfect for older kids, but when traveling with a toddler it was a bit of a pain to work with.  So, it would have been great if there were the same controls in the front as well.  Overall though we were sold on this vehicle and it has truly been one of the best 3rd row SUVs we have tried.  We even thought the gas mileage was really good, of course compared to my car with 35 MPG that’s another story! 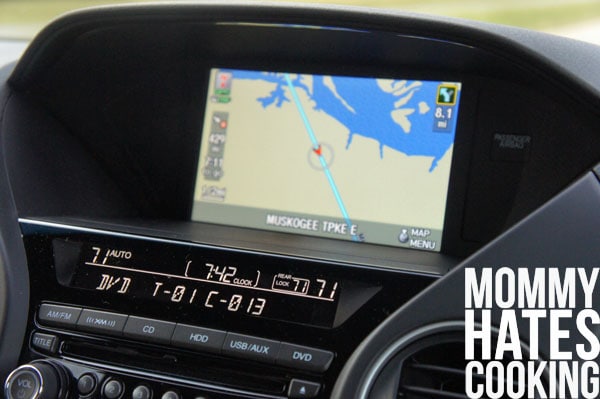 After a week of fun in the sun, it was time to head home!  Stay tuned for more post this week on our vacation with lots of photos of fun you can have in Pensacola Beach!

Disclosure:  The car was provided by Honda for us to test drive on our trip.  All the thoughts and opinions in of it are my own.