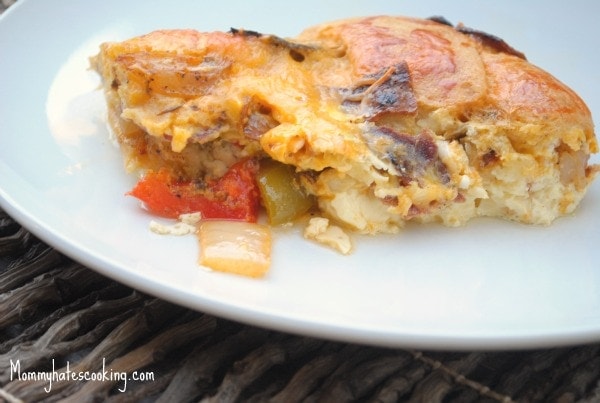 This is the last week of Emeril recipes, I will say it has been a challenge but after the first one I think it got much easier.  The recipe I tried this past weekend was Make Ahead Savory Breakfast Casserole.  It combined Emeril’s Essence seasonings along with various veggies, eggs, cheese, and croissants.  This casserole can be made the night before then warmed up in the oven in the morning just in time to have breakfast family style around the table.  This recipe can be found in Emeril’s Sizzling Skillets cookbook, which I will be giving a way a copy this week!

Also, be sure to enter to win Emeril’s Zak bowls, the giveaway for those ends tomorrow!

She has never done this before.  She is normally around when taking food pictures but usually she’s off doing her own thing and not paying attention to me at least on most occasions.  If she gets close it’s never been this close.  Minutes later this happened…

The blur happened because I was in shock that she really did that and hit the button on my camera while trying to move and get her out of my subject!  My son has his hands up yelling ‘No, May, No!’

My son still in shock that May just did that and he is not thrilled.  I guess I understand why, she did just eat his dinner.  Luckily, the casserole made much more and apparently we learned that our dog really likes breakfast and Emeril’s recipes!

Disclosure: I was given a cookbook to try recipes from and was also given a copy to giveaway, which will happen later this week.  Also, no animals or little toddlers were harmed in the making of this recipe and photo shoot…just dinner.